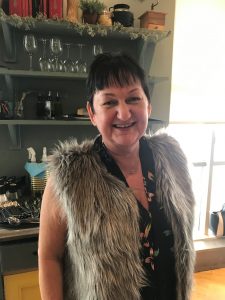 When she was diagnosed with a meningioma back in 2016, Karen remembers her consultant saying to her “you might be different” following treatment. She remembers thinking, “what on earth is he talking about? I’ll be the same old Karen!”.

Karen endured a three month stay at King’s College Hospital due to complications following surgery: “A clot formed after the op, then I contracted e-coli, and then I had to have a shunt. I don’t remember any of it”. She then underwent grueling rehabilitation for a month as an impatient at Darenth Valley and Gravesend hospitals.

The Karen that emerged after all that time was definitely not the same old Karen – she was exhausted, couldn’t communicate, used a zimmer frame and was unable to leave the house. Karen would spend her days watching TV and her existence felt utterly futile.

Then the next cruel twist of fate occurred. Almost a year to the day from her initial operation, a freak accident caused Karen to break her ankle. Now in addition to everything else that she had battled, she found that she was wheelchair bound once again and was now losing all hope. The accident hit Karen hard, and spend her spiraling downwards. Karen says: “I was in a terrible place and I wanted to kill myself. I couldn’t even think of my Brian or my sister or my kids. I said to my friend ‘I want to die, please just let me die and look after my kids’“.

Disney, meetups, and the unconditional love of a dog 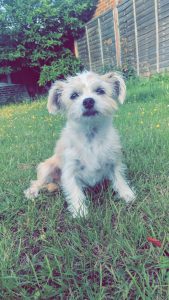 Desperate to get out of the house and to do something, Karen started to attend the Medway brain tumour support group and brainstrust meetups, where she was able to meet others who understood. Against her wishes her husband Brian decided to buy her a puppy: “I said ‘I’m not having a dog, I don’t want a dog!”‘.

Brian also encouraged her to think about going back to work, something that seemed such a scary prospect, so she reached out to her manager at the Disney Store where she had worked prior to her diagnosis. “I’ll never forget how kind and encouraging he was” Karen recalls. “He said to me ‘keep going, we’ll help you’, and he allowed me to come back for half hour shifts to start with to ease me back in”. Karen was given the job of greeting people into the store, a role that was perfect for her as she loves being around people, and she could cope with the reduced hours. A sense of purpose, and ‘the old Karen’ was slowly beginning to return.

Now Karen can’t imagine life without Ozzy the dog, who has been instrumental to her recovery: “He’s my angel – I take him out for walks – it got me out of the house and I’d see people on the walk and talk to them”.

She’s now slowly increasing her hours at work, and she regularly attends the support group and meetups where she now supports and encourages others.

Moving forwards with positivity and laughter

Things still aren’t plain sailing for Karen and she has a long way to go. She’s trying to re-learn computers which she’s finding particularly challenging, and she still struggles with name recall and spoonerisms with her speech. Karen says “it’s hard, money’s not easy, but that’s the case for a lot of people. Sometimes I don’t know what to say when I’m asked a question. It’s getting better but I still get things round the wrong way”.

Now Karen enjoys the fact that her sometimes muddled speech can make people laugh, particularly her spoonerisms such as confusing the word shower with flower. She recalls the laughter provoked when she referred to Tinkerbell as ‘Winkerbell’, when talking to a young child in the Disney Store!

Through the support of family and friends, the support group, meetups, and of course Ozzy the dog, Karen continues to move forward positively and with her trademark humour. She has discovered a fresh passion in helping and supporting others, which has become a strong motivator for her in her recovery. She now attends brainstrust meetups in order to support other people in a similar position to herself, and she hopes to inspire others who might be feeling the same sense of hopelessness that she once did.

Now, when Karen remembers the consultant telling her that she ‘might be different’ following treatment, she realises that she is now different, but not in a negative way. ‘I’m still the same old Karen, but I’m stronger now’. 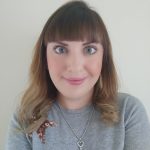 Meet the team: Jodie in the MidlandsUncategorized