Last week, people up and down the country got together to celebrate TEAFEST and G&T Fest.

Whether they were enjoying a cuppa, a G&T, or something else entirely – last week our community got together to show people affected by a brain tumour that they aren’t alone. Our team were lucky enough to attend a few of the events. Read on to see what they got up to! You can still donate to the campaign on our website, or using the text code below. 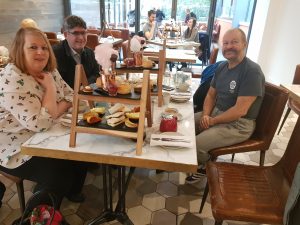 Aisha held a Meetup at Weetwood Hall in Leeds to catch up with her community:

We arranged an afternoon tea for patients and carers in and around the Leeds area.  While enjoying tea, sandwiches and jam and cream scones, we found that patients were able to share experiences of their brain tumour journey.  Though the grades and types of tumours are different the thing in common is knowing that there is someone else in a similar position that you who ‘get’s it’.

We have lots of Meetups coming up – find one near you here. 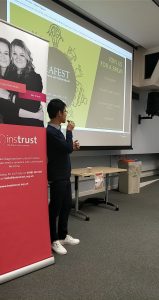 Support Specialist Jodie headed into London to attend a TEAFEST event put on by the UCL Tea Society, to give a talk about the work that we do:

This Teafest, members of UCL’s Tea Society held an awareness event to help spread the word about brainstrust and the importance of supporting people living with a brain tumour diagnosis. As well the Tea Society, the University’s Cancer Charity Alliance Society, and the Mental Health Society also took part in the event.

The evening gave people an opportunity to hear about the work of brainstrust and why fundraising events such as Teafest are so important. Biochemistry students from the University also gave a talk about brain tumour diagnosis and treatments.

A big thank you to the UCL Tea Society for organising this event on behalf of brainstrust. 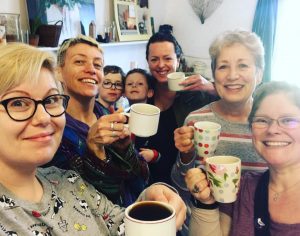 A TeaFest get together in Maidstone – Thursday 21 February

The wonderful Dickenson family, who are also taking part in Follow the Seagulls this April, hosted a TeaFest event, attended by our Support Specialist Jane. Guest of honour at the Dickenson’s TeaFest event was little Seth, 5, who spent most of last year receiving treatment for a medulloblastoma.  Friends and family of the Dickensons came together for their TeaFest celebration at the beautiful location of Blooming Green flowers in Linton, Maidstone.  The grown ups enjoyed tea, coffee and cake, while the children enjoyed lots of cake and lots of running around outside amongst the flowers in the unseasonably warm February weather.  A good time was had by all and £135 raised to support people living with a brain tumour diagnosis. 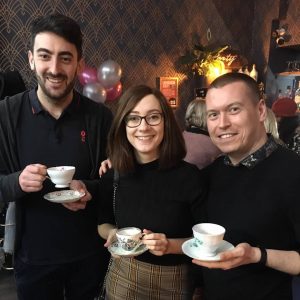 The brainstrust team based in Leeds headed to Tailors Gin Bar, who put on a fantastic G&T filled event. They had free samples of Teetotal G&T for those not drinking alcohol, and Tailor’s also created a special brainstrust bramble for the evening, donating a percentage of the profits from each drink sold. There was a raffle too, for those who wanted the chance to win a bottle of Tailor’s own gin (most people there!)

It was a fantastic evening in which people came together and showed their support for people affected by a brain tumour and for the team to meet our community here in Leeds – thank you to Tailor’s for your support.

A huge thank you to everyone that took part in TEAFEST and G&T Fest, and to those who are doing events in the future. We wish we could have attended every event, and we’re looking forward to sharing some more photos with the community. Whether you’ve organised an event yourself, donated the cost of your morning cuppa or attended an event, you’re supporting the 60,000 people in the UK living with a brain tumour.

If you’ve got a fundraising idea, or would like to get involved in another way, we’d love to hear from you! Please email hello@brainstrust.org.uk 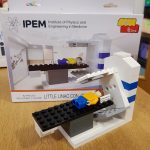 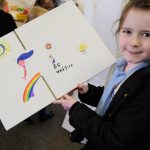