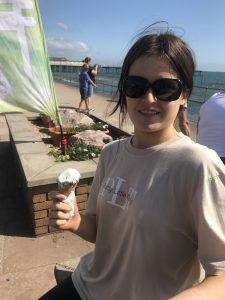 Looking back on the 11 years since their daughter Poppy was diagnosed with a brain tumour, brainstrust volunteer Pippa Simpson catches up with Chris and Rachel about their brain tumour journey.

For information about our support for children and families, visit our little brainstrust website.

In July 2010 Poppy’s parents, Chris and Rachel, received the devastating news that their 4 year old daughter had a brain tumour located around her brain stem.

Poppy began presenting worrying levels of clumsiness at the age of 3. Her pre-school teacher had concerns about what was causing this and suggested to her parents, Chris and Rachel that they take her to the GP. Poppy was turned away several times even after, as her dad described “Poppy was walking like a drunk person, we thought she was messing about” she even walked into the wall in the doctor’s office and her family were still told “she’s fine, she’s just clumsy”.

Chris and Rachel’s anxiety and concerns grew. They decided to get a second opinion on her case. It was then that they were told Poppy had a blockage causing pressure behind her eyes and the cause was unknown and worrying.
She was ambulanced straight to hospital where she was sent for an MRI scan. Due to her age Poppy had to undergo general anaesthetic for the scan. This is a common cause of additional distress on both paediatric patients and their parents when going through both diagnosis and treatment.

“We didn’t know anything about brain tumours at the time, we had no knowledge.”

The day of the results was a nerve-wracking and worrying time for both Chris and Rachel who unfortunately received the news that Poppy had a brain tumour rather bluntly and with lack of compassion.

“It was brutal, it very almost seemed like they took great joy in giving bad news because they didn’t have to do it often”.

Poppy was sent straight into surgery to insert a drain to treat hydrocephalus – a condition seen in younger children in which fluid accumulates in the brain, building pressure.

After several delays and being nil by mouth for many hours Poppy endured her second neurosurgery to perform an ETV procedure – a minimally invasive procedure creating an opening in an area of the brain, allowing Cerebrospinal fluid (CSF) trapped to escape into its normal pathway.

After the ETV had been removed Chris and Rachel were told to make sure their daughter didn’t move otherwise her ‘brain might collapse’. Leaving them with a serious responsibility yet with little information and support from their team.

Over a week later, the family were put on ‘active surveillance’ for 3 months. In October 2010 Poppy had her first MRI scan since surgery and received the brilliant news that there had been no change to the tumour. She continued to have regular scans.

Rachel and Chris felt a lack of confidence within their team. In 2014 Rachel contacted brainstrust who put them in contact with paediatric neurosurgeon Conor Mallucci based in Alder Hey, whose field is to improve the outcomes of children with brain tumours and hydrocephalus.

Treatment with a new clinical team

Their experience as a family was completely different under the care of Mallucci: “No matter what he’s telling you you feel at ease”. The MRI scan was less traumatic for Poppy as the Alder Hey team were empathetic and really cared for her throughout. They felt they had wrap-around care with both the Alder Hey team and brainstrust supporting the family.

“brainstrust have always stuck with us”

In 2019 Poppy had another ETV procedure and was told to come back for a scan in 2 years. When the COVID-19 pandemic hit, the call for Poppy’s results was delayed by 3 weeks .

The results were immediate and the family was told that there had been slight changes to the tumour however this may be attributed to her growth over the last 3 years.

They said it was: “The worst 10 minutes of my life waiting for this phone to ring”.

Results showed that the brain mass had in fact shrunk and the family were told it may not have been a brain tumour after all but hamartoma – a disorganised piece of brain that’s blocked the fluid canal resulting in Hydrocephalus.

Poppy is now in remission and will have her final MRI in 1 year if necessary and then be transferred to adult oncology if she wants. Her maturity and outlook on the experience is inspiring and refreshing to hear. She’s a role model in terms of not being defined by her diagnosis.

“You don’t have to tell people about your brain tumour diagnosis if you don’t want to be defined by it or don’t feel like it’s necessary. I think people that haven’t been through something like that tend to joke about it which is why I don’t tell people. I moved school, made new friends and just told the people I’m closest to. Some people don’t know about it to this day”.

Poppy’s story has been captured and written by brainstrust volunteer Pippa Simpson, who endured her own personal diagnosis with a rare APXA brain tumour in 2019.

Now having been brain tumour free for 2 years she has taken time to collaborate with brainstrust and is currently working with the charity to create support resources for Teenage and Young Adults (TYA) going through their own diagnoses. These include a page on the official brainstrust website including ‘Top Tips’ for TYAs to understand and know about what challenges they may face, and a radiotherapy information book aimed at TYA patients.