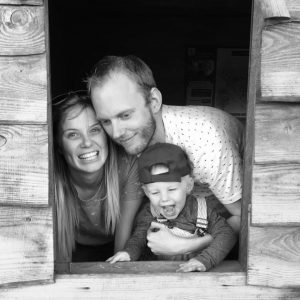 This family’s world was torn apart when their son, Noah, was diagnosed with a brain tumour during the pandemic. The last few months have been a whirlwind, and now Nicci, Tom and Noah have raised thousands to support others that find themselves in this terrifying situation.

When 2-year-old Noah had an MRI scan this August, Covid restrictions meant only one parent could be with him. For four hours, Nicci faced the agonising wait for answers on her own, and then received the news that is every parent’s worst nightmare: her little boy had a brain tumour.

Noah had been diagnosed with epilepsy when he was 11 months old. Until then, he had been a perfectly healthy little boy, achieving all his milestones early and providing no cause for concern. Whilst seeking medical support in the months that followed, the family moved hospitals and consultants. It was then that a routine MRI was requested. The news from the doctor turned their world upside down.

“I was numb,” Nicci says. “I didn’t hear anything else from that conversation. I couldn’t wait for the doctor to leave so I could call my partner. I broke down. My partner was allowed entry to hospital and we both were shown the MRI scans. The tumour was huge. My partner Tom collapsed and was unable to talk.”

What happened next was a blur. A hospital transfer, more MRI scans, blood tests and then Noah’s first surgery to undertake a biopsy. Less than 24 hours after his surgery, Noah was at home playing in the garden, while the family waited to hear from the doctors.

And now we wait…

Throughout this traumatic journey, Noah’s parents have found the waiting has been truly agonising.

“When everything was happening so fast, we didn’t really have time to process anything. The worst part of this entire journey so far was waiting for Noah’s biopsy results. One week passed, which turned into two… then we finally got the call. They told us the tumour wasn’t cancerous – the rest of the call is a blur.”

The family were told that Noah has a DNET tumour, which was likely there during Nicci’s pregnancy. What lies ahead for them is more hospital visits for MRIs, further tests to gather more data about Noah’s tumour, before surgery in the new year. 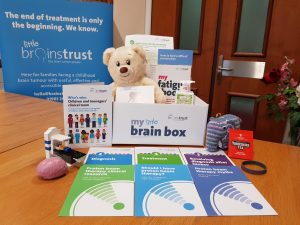 brainstrust‘s support specialist for children and families has been supporting the family:

“Nicci reached out to us when her beautiful little boy was newly diagnosed with a brain tumour, it had only been two weeks. I organised for a tailored little brain box to be posted out for Noah. Nicci and I are in regular contact and she knows our 1:1 support is available whenever she needs. Team Noah are real super-heroes, despite going through a difficult time they are supporting us to raise funds and awareness about childhood brain tumours through our Run Row Ride challenge. It is heart-warming to know that we have been able to support Nicci, Tom and Noah through a challenging time and we will continue to do so for as long as they need.”

Little brain boxes are boxes full of resources, information, toys and treats for children with a brain tumour and their loved ones. We tailor the contents of each box to each child’s diagnosis and situation.

Turning pain into something positive

With the road ahead in view, and lots more waiting on the horizon, the family were keen to throw themselves into something to distract them from everything going on. Whilst receiving support from brainstrust, they found the Run, Row, Ride challenge, where participants take on 30 miles over the 30 miles of November for the 30 people diagnosed with a brain tumour every day in the UK.

Nicci, Tom and Noah have all taken part in the challenge together.

“The waiting is so difficult, so when we were aware that not much would be happening in November and we saw the challenge we jumped at the chance to give something back to brainstrust.

The challenge has given us so much positivity, from firstly seeing the wonderful messages of support we as a family have had. So many people have reached out to us, it has made the darkest of days a little easier knowing we have so much love behind us.

Secondly, the daily exercise has allowed us all time to look after our mental well-being. We all feel much stronger to face Noah’s mountain.” 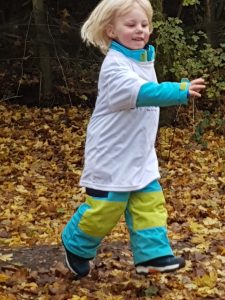 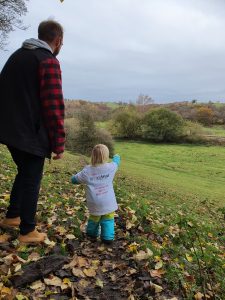 The incredible family have raised over £1760 through the challenge, with funds raised going to support other families whose lives have been devastated by a brain tumour diagnosis. You can donate to their fundraising page here: https://www.justgiving.com/fundraising/Nicola-rushton2 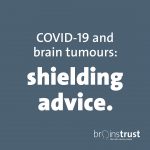 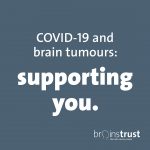 COVID-19: The current state of play for people with a brain tumourBrain News, Research News