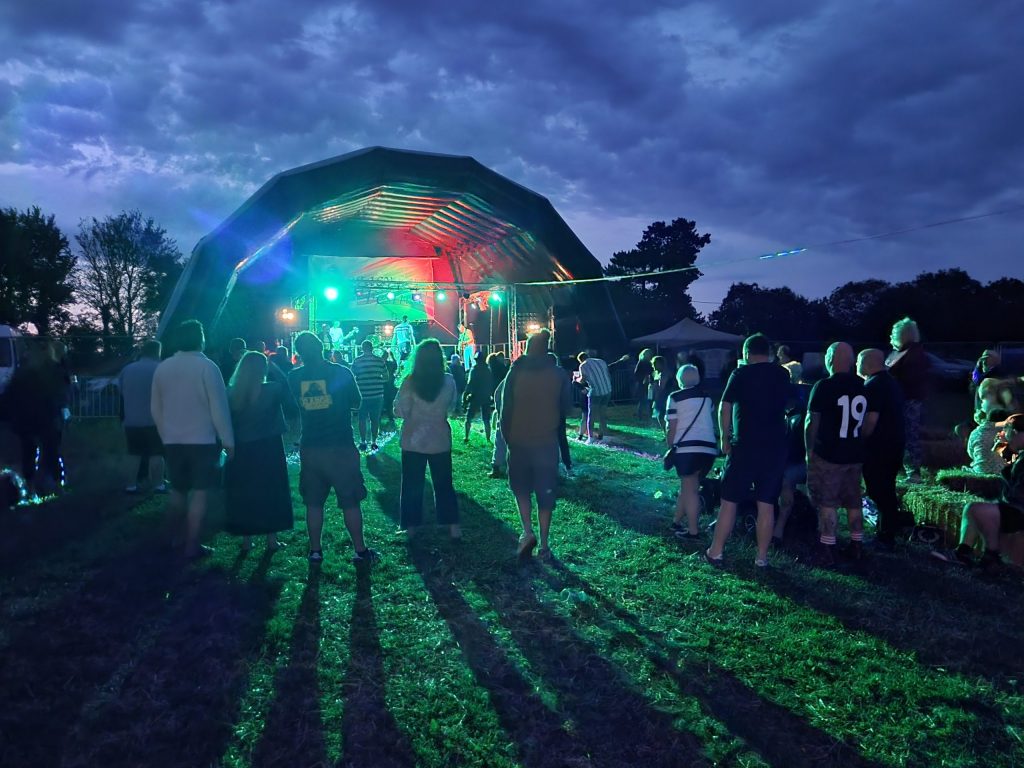 Legacy Festival is an annual three-day event organised by Lyndsey Rowe, founder of Lloyd’s Legacy. As a lasting tribute to her son, Legacy Festival brings people together to celebrate the good times with a focus on live music, good food and a field full of campers and vanpers (that’s campervans with a tent attached to those of us not in the know). It’s a popular event which sees people return year on year whilst attracting ever larger new audiences too. After a year away due to Coronavirus restrictions, this July Legacy Festival returned with a bang! Our Head of Income, Tom travelled down to a field in Eastleigh to muck in and experience everything for himself. Read Tom’s story below:

After a few false-starts and the delay of “Freedom Day”, the fate of the festival had been in the balance for a second year running. But as I pulled into Highbridge Farm on Friday morning, I was immediately impressed by the scale of the event that was to come. The mainstage gave me Glastonbury vibes and I knew immediately that this was going to be a weekend to remember! Hard to believe that there had been a scramble to get everything rearranged in such a short space of time.

I met Lyndsey and her team, many of whom are friends and family that have been involved for years, and the passion they had for the event was palpable. Marquees, bars, kids inflatables, games and food stalls were taking shape, all with the capability to accommodate social distancing. I couldn’t help but get a tingle of excitement to be at an event of this scale after such long periods of various lockdowns and restrictions.

You don’t have hayfever do you? 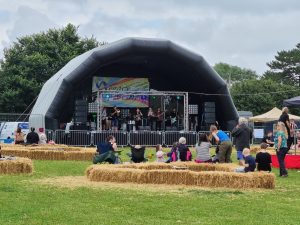 I said I was here to muck in and was soon put to work, helping assemble bags of branded t-shirts, masks and festival information for the raft of volunteers that were involved. We put up some brainstrust banners across the site that Lyndsey had asked me to bring before moving on to arranging a small mountain of hay bales into seating areas. In glorious south coast sunshine, it’s fair to say this was warm work! The result was areas where families and friends could be together whilst potentially distancing themselves from other groups, with a large open dancefloor area in front of the stage with plenty of space for everyone.

With Covid safety very much at the forefront of everyone’s minds I filled and installed hand sanitisers across the site – bright blue in keeping with the festival colours. There were so many little jobs that took up the morning, making sure it was safe for the hundreds of imminent visitors, that before I knew it, the gates were due to open.

It wasn’t long before the guests started to flood into the main arena, having pitched their tents and parked their campervans in the adjacent campsite field. The resident DJ kicked off the music whilst the first band sound-checked and the event was quickly in full swing! The bands, many of whom had initially committed to perform in 2020 didn’t disappoint and were clearly excited to be on stage performing live to an audience again. With everything from ska to rock, and funk to britpop, there was something for everyone over the course of the weekend, and the performers absolutely gave it their all. The atmosphere across the whole weekend was incredible! 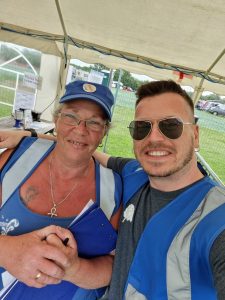 On Friday night, ferocious thunderstorms hit the south coast at around 2am. Expecting to see something fairly apocalyptic on Saturday morning it was testament to Lyndsey and her team that everything was intact and secure. Day Two kicked off as planned and the crowds started to arrive again, prepared for whatever adverse weather the day might through at them. Nothing was going to stop people from having a fantastic time!

I chatted with Lyndsey Rowe as the day went on and she explained to me why she so desperately wanted the event to go ahead as planned.

“Lloyd would have been 40 the day before the festival started this year. We celebrated his birthday as a team and shared some wonderful memories, and I really wanted to make this whole event into a celebration. His legacy is that other people with a brain tumour get the support that they need.”

Despite a national pandemic, acts having to isolate at the last minute, and a whole heap of added Covid-related safety measures, Legacy Festival still raised an incredible £6,872! Lloyd’s Legacy has now raised almost £40,000 for brainstrust, and we couldn’t be more grateful. A huge thank you goes out to the event organisers, the many volunteers, supporters, and of course, everyone who attended. The proceeds raised at Legacy Festival will help to fund counselling sessions for people with a brain tumour, a cause which Lloyd himself was very passionate about.

We are incredibly proud to have supported thousands of people through difficult journeys, and we couldn’t do this without the generosity and support we receive from funds like Lloyd’s Legacy. 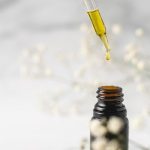 An introduction to cannabis medicinesPast Events 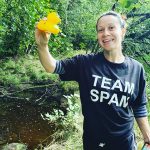